In the old days, we typed emoticons in our messages, to show a grin, or wink, etc. Now we use emojis online, and I finally learned how to add emojis in Excel too. Thanks to Wyn Hopkins who showed me this trick – my worksheets will never be the same! Also, thanks to Duncan Williamson, who shared a Sparklines trick.

In the early days of online newsgroups and bulletin boards, the hardy pioneers had to type a series of characters, to create emoticons. We didn’t complain though – it was a step up from chisels and stone tablets.

Here are a few emoticons that I remember using, and you can find a longer list on Wikipedia.

These days, if you type one of those old emoticons, the app that you’re using will probably convert it to an emoji. They’re little pictures, that show the expression, often with a little yellow face, like the old Smiley face.

You an learn more about emojis in this Wikipedia article, and keep reading here, to see how to add emojis in Excel. 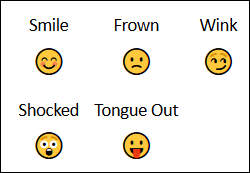 I can’t sleep because I stayed up late when I discovered that I can put emojis in IF functions in my monthly #budget #spreadsheet in @googledrive.
if savings >=3000$
if savings <=0$

And here’s a screen shot of sam’s emoji-filled formula. Awesome! 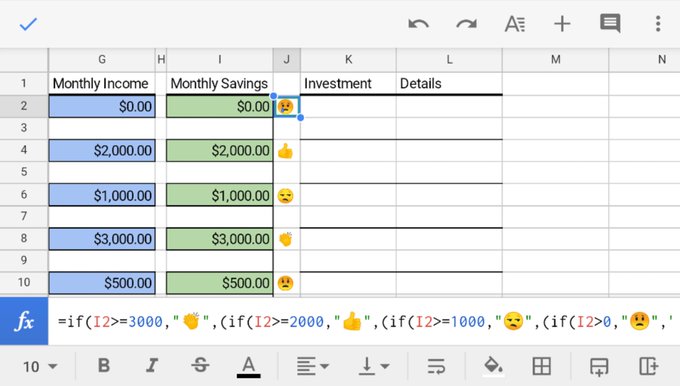 I was on my iPad when reading that tweet, away from Excel, but my first thought was doing something similar with Conditional Formatting, and a font like WingDings. That’s how I built these “Do It Yourself” replacements for Excel’s built-in Icon Sets.

How to Add Emojis in Excel

Soon after I replied to sam’s tweet, Wyn Hopkins explained how to add emojis in Excel.

Emojis work in #Excel too. Windows key & . (full stop). Full colour in Excel for web, black and white in desktop

First thing the next morning, I tried Wyn’s tip in an Excel worksheet. I pressed the Windows key and typed a period, and voila!

A small window appeared, full of emojis, with instructions at the top – Keep typing to find an emoji. 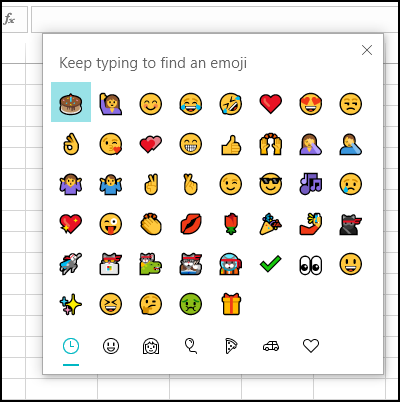 Ooooohhh! I’d never seen that trick before, and I’ve been using Excel for approximately 150 years.

Seeing that emoji pop-up window  was pretty cool, so I typed “cool”, and it found 2 emojis for me. 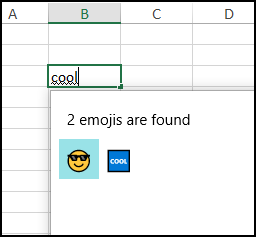 As Wyn mentioned in his tweet, the emojis are black and white in desktop Excel, and colour in online Excel. 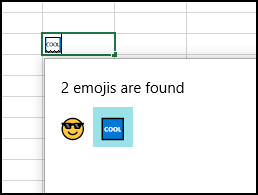 Here’s the same emoji, when I entered it in Excel Online. Obviously, I’ll have to use the online version from now on. 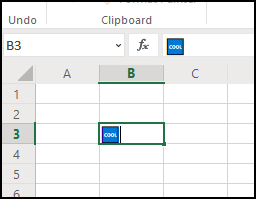 Another way to find emojis in that pop-up window is to use the category buttons at the bottom. Point to any of the buttons, to see the category name. 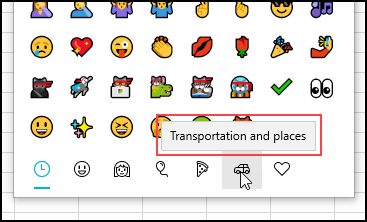 In the People category, there are colour options at the top, so you can choose what you need. 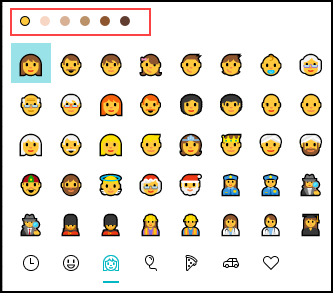 In sam’s tweet, the emojis were hard coded into an IF formula. You can do that in Excel too – just remember to put the emojis inside quote marks.

Instead of hard coding things into a formula,  I made a lookup table with scores and emojis.

Then, I added an INDEX and MATCH formula, to show the emojis beside a list of scores on the worksheet.

That worked well, and it would be easy to change the ranking scale and/or emojis, at any time. 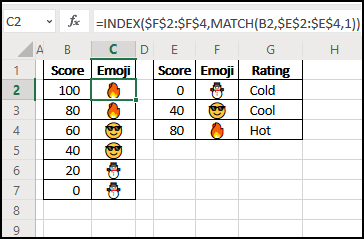 Why Add Emojis in Excel?

After all of that, you might be asking, “Why add emojis in Excel?” And the answer to that is, “Why not?”

For most companies, emojis wouldn’t be appropriate in the financial reports that you send to your stakeholders. But for internal files, emojis could add a touch of humour, and we sometimes need that during the day!

As with all things in Excel, use your powers for good, not for evil. 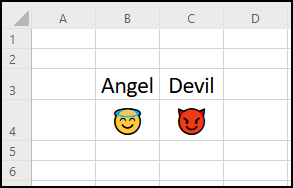 And now that I know how to add emojis in Excel, maybe I can finally retire my Happy Face chart!

Duncan Williamson also replied to that emoji Twitter thread, and shared a link to his post on showing icons in a cell that has Sparklines. The cells have a custom number format that shows a coloured icon.

The instructions are at the link above, and there’s an animated gif, at the end of the page, that shows how to set up the formatting.Click on that gif, to see the enlarged version. You can download the Excel file too, and try it out.

Thanks for sharing this cool trick, Duncan!

[update] After he read this blog post, Ken Puls, from Excelguru, sent me an Excel file with a chart full of emojis. I added a Chart List sheet too, so you can select an emoji code, or an emoji picture, to see the information about that selection.

This screen shot shows the chart in Excel online, where the emojis are coloured. If you open the file in Excel desktop, the emojis will be black and white. (Is there a crying emoji? Emojus?) 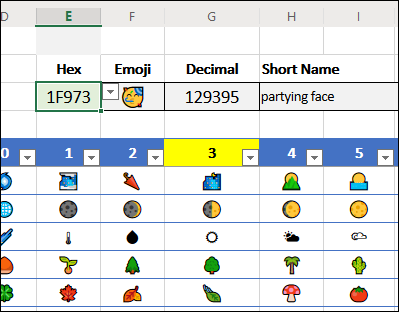 To get the workbook, go to the Sample Files page on my Contextures site. In the Functions section, look for FN0064 – Emojis Chart and List. The file is in xlsx format, and does not contain any macros. 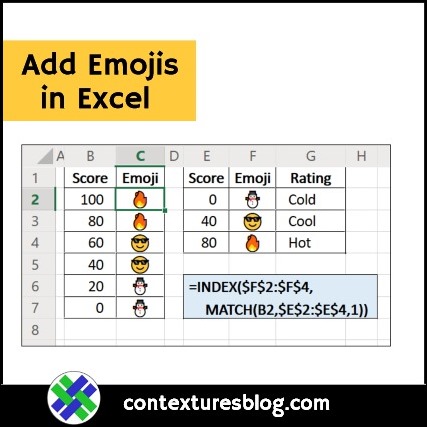 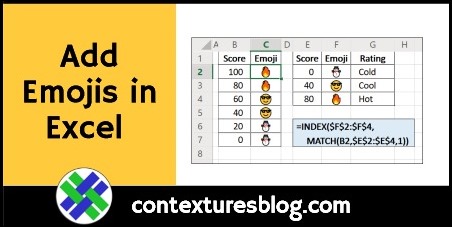 How to make an Interactive Chart Slider Thingy

Introduction to Power BI – What is it, how to get it, how to create reports with Power BI and how to publish them?

Top 10 Excel formulas for IT people