If you need to know what color is in a worksheet cell, or a shape, you can check it manually, or use VBA code to find the color number. There are conditional formatting color macros too, but they’re a bigger challenge, and didn’t work for a project that I built recently. Here’s what I was working on, and some of the Excel color resources that I used along the way. There are links to download my sample file, and one from Visio MVP, John Marshall.

Someone asked if it was possible to use conditional formatting in an Excel pie chart. They had found formulas to add conditional formatting in a column chart, but that didn’t do what they needed. In this case, the data had two different amounts – the total orders, and the total amount that had been invoiced. From those amounts, the Percent Invoiced had been calculated. The pie chart needed to show

That sounded like an interesting challenge, so I decided to tackle it.

Here’s a screen shot of my sample. It has 11 Client names – the same number that the email question had used. 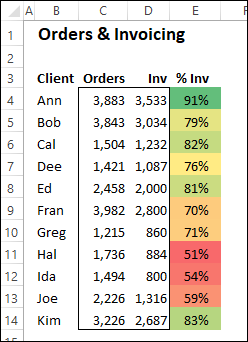 But, how can we get those colors into the chart? 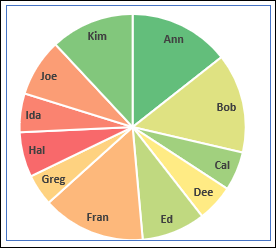 Get the Color Scale Colors

Update: Thanks to Andy Pope, who gave me the property that I needed to get the Conditional Formatting color — DisplayFormat. I’ve changed the macro to use that property.

Because I couldn’t get the conditional formatting colors (before Andy Pope’s tip), I used a clunky workaround. It involved a second sheet with a color list, with the cells filled with colors from the color scale. The painful steps are described below, but you can skip reading this, and go straight to the macro.

Get the Color Scale

The sample data has 11 clients listed, so the chart needed to match a color scale of that size.

As you can see, the colors are slightly different, because the percentages aren’t equally distributed, like the numbers 1 to 11 are. So, I removed the conditional formatting from the % Invoiced column, and decided to use the colours for 1 to 11. 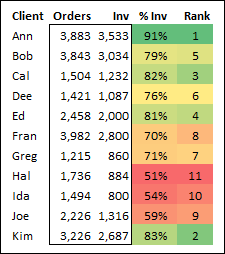 And that’s when the fun began. 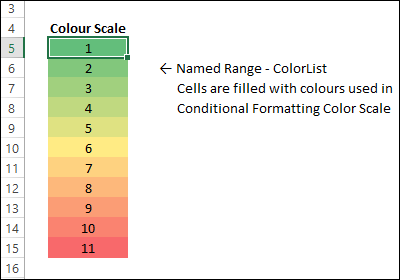 Since I couldn’t get the conditional formatting color with a macro, I had to resort to brute force, to get the color for each ranking number. Close your eyes, if you’re a squeamish type – this gets a bit ugly!

The colors were the same, but now Excel could extract the color number from those cells The macro would find the cell in the color list that matched the client’s rank number, and use the color from that color list cell. However, now that the revised macro uses the DisplayFormat property, the workaround isn’t needed. The macro can get the conditional format color from the % Invoiced column instead.

Macro to Color the Chart

NOTE: The macro has been updated to use the DisplayFormat property, instead of a ranking list.

Here’s the finished Conditional Formatting Color report, with the sample data, the bar chart, and the pie chart. It was an interesting project, so download the workbook (link below), if you’d like to test it.

NOTE: There is also an event procedure on the Chart sheet, and it automatically runs the ColorChartDataPoints macro, if an Order total or Invoice amount is changed. 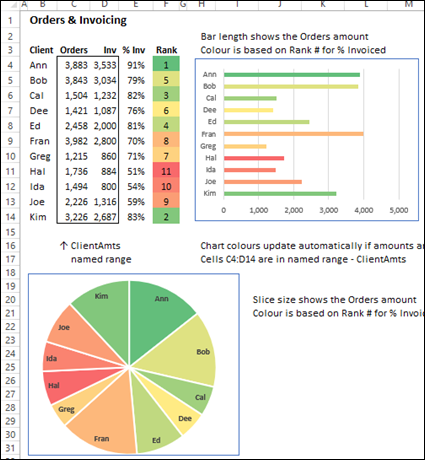 All this work with Excel colors reminded me that John Marshall had sent me his Excel Colours project a while ago. If you’d like an Excel file with tons of colour lists, you can download a copy of John’s sample file from the Technet Gallery.

John is a Microsoft Visio MVP, and needed colour lists for a Visio project. That’s easier to do in Excel, so he set up the colour lists there. The workbook has 11 sheets with colour samples, and the RGB, Hex, and other values. The main list is shown below

If you select a cell, and go into the More Colors option, you can see the RGB settings for the selected cell, on the Custom tab. Those numbers should match the values that you’ll see in the Colour lists of John’s workbook. 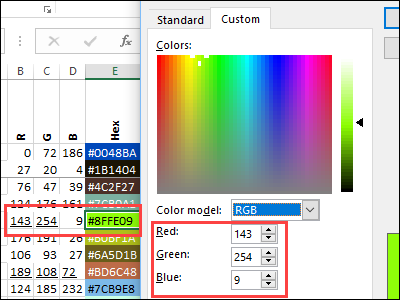 There are several other colour lists in John’s workbook too, including Crayola, LEGO and Pantone. On the workbook’s Introduction sheet, John gives details on the source for each list.

To keep the workbook from slowing down, the colour list formulas are in the first row only (orange cells). Below that, the formulas have been copied, and pasted as values (green cells). If you change any of the colours, you could copy the formulas down again.

Most of the formulas are based on User Defined Functions (UDFs) that calculate each colour’s values.

In the screen shot shown below, you can see a formula that uses a UDF named RBG_to_HSV UDF. It calculates the colour’s Hue, based on the RGB (Red Green Blue) values in columns B, C and D.

The workbook and its code are unlocked, so go to the Visual Basic Editor, and take a look at the functions in the code module, to see how they work. 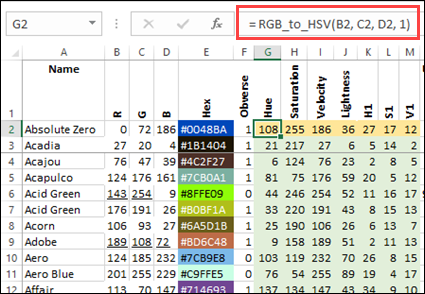 Here are a few more of the Excel Color, and Excel Chart Color resources that I used, while working on this interesting project.

Get the Color Workbooks

Here’s how to get the two sample Excel files that I mentioned: