Instead of showing a budget’s forecast, actual and variance data all at once, click a button to view the values one at a time. That makes the report easier to read, and takes less space on the worksheet. See how this technique works in my Excel Budget Report with value selector workbook.

There’s a budget report tutorial on my website, which shows how to set up a workbook with forecast and actual budget amounts, and then calculate the variance.

Here’s the Forecast sheet, where you enter the amounts in the green cells. Time for an Update

My original budget report workbook was created way back in September 2002! It was time for a new version of the budget workbook, using today’s Excel tools.

The new Excel Budget Report workbook takes a different approach for entering and reporting the budget amounts. Here’s what the new budget report looks like, and there are setup details below.

Instead of entering the Forecast and Actual amounts horizontally, the new workbook has a named table for data entry – tblInput.

Enter the Forecast amounts there, and later, add the Actual amounts, when they’re available. 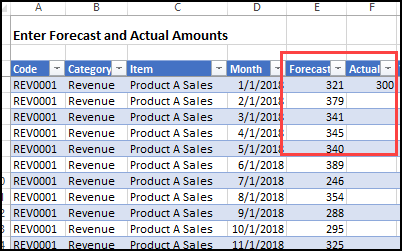 The data entry table also has columns with formulas to calculate the Year to Date (YTD) amounts, and the Variance.

For Variance, the Forecast is subtracted from the Actual, or zero is shown, if there is no Actual amount.

For Variance %, Actual is divided by Forecast, and 1 is subtracted, or zero is shown, if there is no Actual amount. 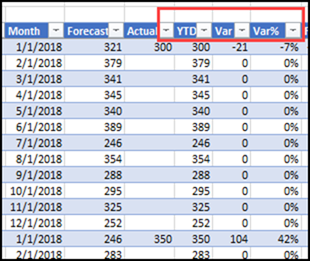 On another sheet (Lists), there is a named table (tblRpt), with the five budget report types that will be available.

In the adjacent column, the number format for each report type is entered.

NOTE: The budget report types are an exact match for the columns in the data entry table. In another formula, the MATCH function will find the column heading that matches our selected report type. 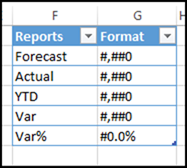 There is also a pivot table based on the Report types table, with the Reports field in the Rows area. 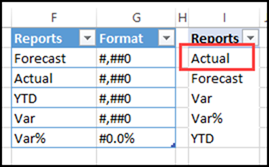 In a cell named FormatSel, an INDEX/MATCH formula returns the format for the report type in cell I2

That value will be used in a macro that formats the final report. 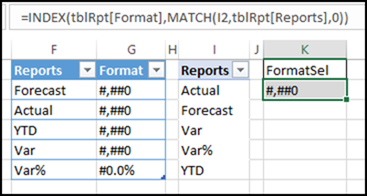 The next step is to insert a Slicer, based on the Report Type pivot table. This will be used to select which values to show in the final report.

Change the Slicer settings to hide the headings, and set it to show 5 columns 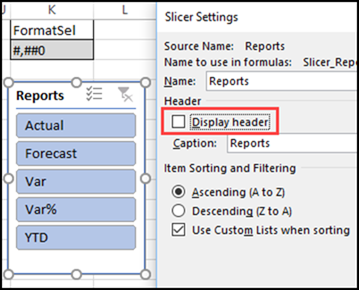 Adjust the Slicer’s size, so the five Report Types are visible. The Slicer will be moved to a different sheet later.

Back on the Data Entry sheet, the final column in the input table is “Report” This column has an INDEX/MATCH formula that gets the value based on the Report Type in cell I2 on the Lists sheet:

Currently, cell A2 show “Actual”, so that value is returned in the Report column.

To create the budget report, insert a pivot table, based on the input table.

The Budget Report sample file has a macro, to automate that. 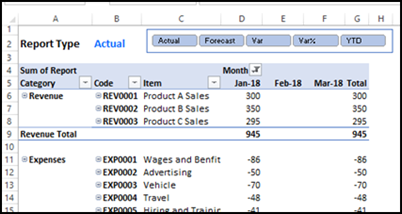 Macro to Update the Pivot Table

The Budget Report workbook has a macro to update the pivot table’s Report values automatically, when you click a Report Type on the Slicer. The macro also formats the numbers, based on our lookup table.

To see the code:

The Slicer updates the Report Type pivot table (ptRptSel), and that fires this update event.

After the macro has been added, go back to the Report sheet, and test the Slicer.

In the animated screen shot below, you can see that the blue text changes, when the Slicer is clicked. That cell (B2) is linked to cell I2 on the Lists sheet, to show the selected Report Type.

In the sample file, there’s another Slicer too — use it to show or hide the zeros on the Budget Report sheet. 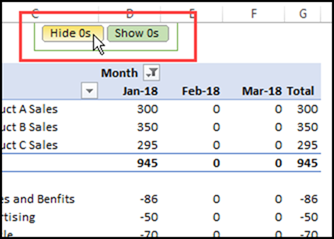 That slicer is based on another named table and pivot table (ptZeros) on the Lists sheet.

There’s an extra section in the code on the Lists sheet, to show or hide the zeros on the Budget Report sheet.

Get the Excel Budget Report Workbook

To get the Excel Budget Report with Value Selector workbook, go to the Budget Variance page on my website.

This example is #2 in the download section. The zipped file is in xlsm format, and contains macros.