Do you ever need to choose random names from a list in Excel? Maybe your charity is picking winners for a raffle, or your blog is doing a giveaway, or you need “volunteers” for a special project at work. As long as you have a list of the names, or ticket numbers, or anything else, Excel can do a random draw for you.

There’s a new sample file on my Contextures site, and you can use it to randomly choose items from a list. The workbook uses formulas to do the choosing – there aren’t any macros to worry about.

There are 2 “Chooser” sheets in the workbook:

Which version will you use? Do you have Excel 365 now? Or are you still using an older version of Excel?

In the Name Chooser workbook, there a list of names, formatted as an Excel table. The table has 2 columns:

Both columns in the table have been named, and the names are used in formulas on the Chooser sheets 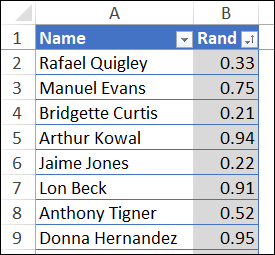 How Many Names to Choose?

On each Chooser sheet, there’s a cell where you type the number of names that you want to randomly choose.

Here’s the Chooser365 sheet, where we’d like to see 3 randomly-selected names.

In the sample file, there’s a list of fake names, but you could put any list of unique items there instead.

For example, it’s almost Halloween, so put all your favourite scary movie titles there. Then, type a number, and watch those movies on Netflix this weekend! 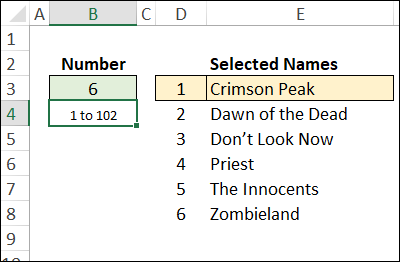 In the Excel 365 version of the Chooser, Excel’s new spill functions are used. There are only 2 formulas on the worksheet, and the results spill down, into as many rows as needed.

The SEQUENCE formula in cell D3 creates a list of numbers for the names, based on the number in cell B3.

And this formula in cell E3 creates the random list of names, using the new FILTER function to pull the list.

Save the Selected Names

IMPORTANT: Every time the worksheet calculates, the list of randomly-chosen names will update automatically.

If you want to save the list of names that were selected, copy the names, and paste them as values, somewhere else.

The other Chooser sheet has formulas that can be used in all versions of Excel. The results don’t spill down the sheet, so I set up 10 rows with formulas, to show the randomly selected names.

This formula is entered in cell D3, and copied down to cell D12. These formulas create a list of numbers for the names, based on the number in cell B3.

This formula, entered in cell E3 and copied down to E12, creates the random list of names.

Here’s how the Excel All Versions random name formula works:

Get the Random Name Chooser Workbook

To get the random name chooser workbook, and more details on how it’s set up, go to the RAND and RANDBETWEEN page on my Contextures site. 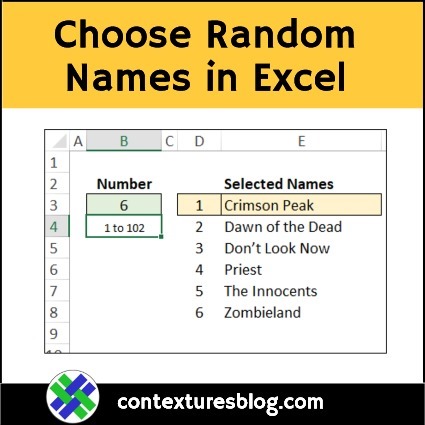