Someone sent me a workbook in which a simple VLOOKUP formula was returning #N/A errors, instead of the correct results. The product numbers looked the same, but Excel didn’t match them in the lookup. Can you solve this VLOOKUP formula error mystery?

To show you the problem, here’s a screenshot of the lookup table, and the VLOOKUP formula. The formula in cell D5 says that the blue cell (A2) and the green cell (D2) are equal.

However, there’s a VLOOKUP formula error in cell E2. Instead of returning the product name, “Blue shirt”, the result is #N/A.

Get the VLOOKUP Sample File

If you love an Excel challenge, click here to download the sample file, and see if you can fix the problem – it’s a tricky one!

The troubleshooting steps for the VLOOKUP formula mystery start in the next section.

Usually, this type of VLOOKUP error occurs when one value is a real number, and the other is text number. See the details for that type of Number/Text problem on my website.

To test the numbers in the sample file, I used the  ISTEXT and ISNUMBER functions. The screen show below shows the results of that test, for the values in A2 and D2.

Both cells contain text, not real numbers, so a Number/Text issue isn’t causing the errors in this workbook.

Another common cause for VLOOKUP errors is extra characters in one of the cells – usually extra space characters.

Using the LEN function, I checked the length of the string in each cell.

The TRIM function will remove leading,  trailing, and duplicate spaces.

There was no change, so the extra characters are NOT normal space characters. 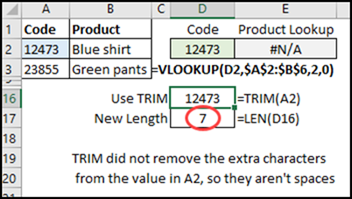 The next step is to figure out what those extra characters are.

The numbers from cell A2 appear in positions 2-6, and there are hidden characters at the start and end of the string. 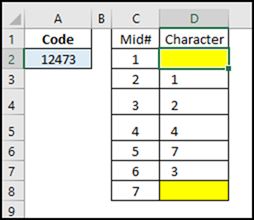 In the next column, I used the CODE function, to see what each character number is. Some characters, such as non-printing characters 0-30, can be removed with the CLEAN function. Let’s see if our hidden characters are one of those.

No, Excel says that cells D2 and D8 contain character #63. 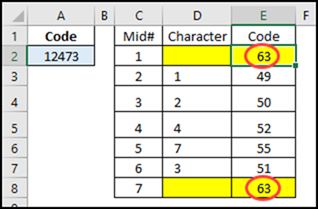 There isn’t a non-printing character with code 63 though, so what is happening?

I typed 63 in cell D10, and used the CHAR function to see the character with that code number. Hmmm…it’s a question mark. 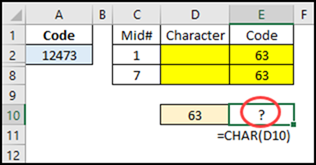 So those hidden characters are not really questions marks, but Excel is confused, and returns that code number anyway.  (I found that clue on the Mr. Excel forum).

Whatever they are, we can’t use CLEAN to remove those hidden characters.

To fix the formula, we don’t need to know what those hidden characters are. However, I was curious to find out if they were both the same character, or two different characters. 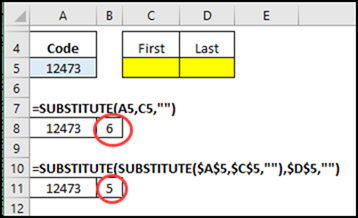 If you really need to identify one of these strange characters, use the AscW function in a macro, or in the Immediate Window. This bit of code will show the character number for the first character in the active cell.

To fix the problem, I set up a “hidden character extraction range”.

NOTE: You could put this information on a hidden sheet. I left them on the same sheet as the VLOOKUP, so it’s easier to see how they’re used.

Then, combine those hidden characters with the product number in the VLOOKUP formula in cell E2, to get the product name:

Thanks to Mohit Kejriwal for sending this question

Get the Sample Workbook

To see all the details on the VLOOKUP Formula error problem and fix, download the sample file. 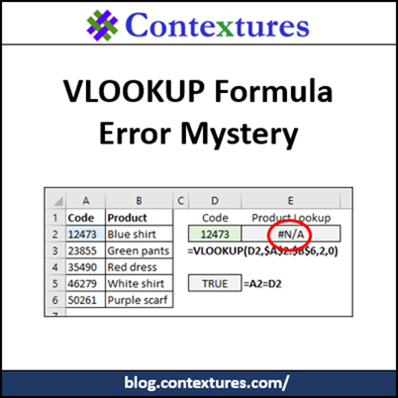 Your Top Excel Tips For Beginners